At the Business Meeting of the 2017 CHF AGM held in Niagara Falls on  June 7th – 10th Sarcee Meadows was honored to accept The Award for Co-operative Achievement for the work of the Sarcee Meadows Women’s Circle. Since receiving this award an article about the SMHC Women’s Circle and The Award for Co-operative Achievement was published on the Co-op News website and through the power of Social Media has been shared worldwide by several organisations including various sectors of the International Co-operative Alliance, Co-operatives and Mutuals Canada, North American Students of Cooperation (NASCO) and numerous other Housing Co-operatives. (To view the Co-op News article, please CLICK HERE.)

Below is the text of the award presentation made by Barb Millsap, CHF  Canada Treasurer and Director at Large:

And now, the recipient of CHF Canada’s Award for Co‑operative Achievement. This housing co-op is a timely and powerful example of the amazing things that can happen when we simply sit down and get to know each other. Sarcee Meadows Housing Co-operative in Calgary, Alberta is one of Canada’s largest and oldest housing co-op communities. Established in 1968, the co-op today is reflective of much of Canada: diverse, urban, and with a wide range of ages and families who call Sarcee Meadows home. And like Canada, the co-op is not immune to issues of racism and discrimination. Three years ago, six women in the co-op took one small, but very significant step towards building bridges in their community. The women sat down to share and learn about each other’s cultures. Over chai tea and butter chicken, something very special formed: the Sarcee Meadows Women’s Circle. This is their story:

Sarcee Meadows and their Women’s Circle is an inspiration to us all and is just the kind of story that we need to hear more of. In a world that is increasingly divided along lines of ‘us vs. them’; where racism, discrimination and fear of the ‘other’ are actively stoked by political parties, and where these ideologies have very real and tragic consequences for groups, it is inspiring and vital when we hear of people and groups who are building bridges instead of barriers. Sarcee Meadows and their Women’s Circle is one such community who are doing so. As you saw in that remarkable video, the Women’s Circle has made very real and meaningful impacts in the lives of the women involved. Empowering, sense of community, belonging and friendship are just some of the many powerful words that the women of the Circle use to describe their group. But it’s not just the women at Sarcee Meadows who have benefited from the circle. The group is changing perceptions and bridging divides outside of their co-op community as well. They have hosted Cultural Events with a neighbouring community and are working with the City of Calgary’s Recreation Department to provide Girls & Women Only swims at City pools, providing a solution for Muslim women and girls to be able to swim and socialize together in a safe and culturally appropriate environment. These acts exemplify why their co-op is being awarded this year’s Award for Co-operative Achievement. The co-op is being recognized for building bridges in their community, living diversity and reminding us all that everyone benefits when all cultures are welcomed and included. Please join me in recognizing the remarkable achievements of Sarcee Meadows Co-op!” 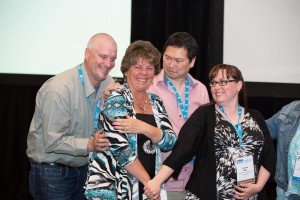 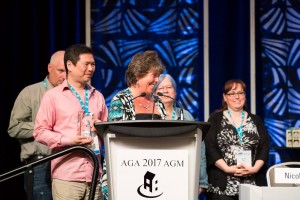 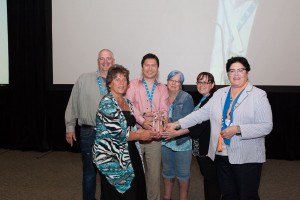 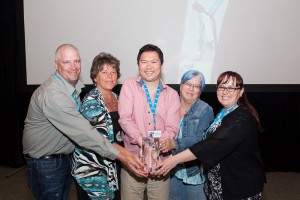 We’d like to extend a special Thank You to CHF Canada for the photos above and also to Tannis Ali of Ramsay Heights Housing Cooperative for providing the below video of part the award presentation and Kathy’s acceptance speech on behalf of SMHC: